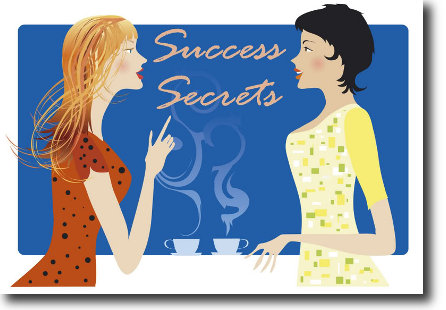 Why are there more highly successful male entrepreneurs than women entrepreneurs? A key reason, I believe, is that women are not as aware as men are of the power of personal branding, whether it’s self promotion, projecting confidence or strategic networking.

In talking over 150 of highly successful women entrepreneurs and business women for my new book, Women Who Brand: How Smart Women Promote Themselves and Get Ahead, I was struck by 3 personal branding habits that separate women who achieve great things that all women, particularly women entrepreneurs, should adopt:

1. Fake it until you make it

Highly successful women don’t leave things to chance. If they see a gap in the marketplace that they can fill, they go for it even if it’s a bit of a stretch. Case in point, real estate entrepreneur Barbara Corcoran. After cycling through over twenty different jobs in her twenties, Corcoran landed in New York City determined to succeed in the real estate business. Corcoran’s company was tiny with just eleven apartment sales the first year and she was a newbie to real estate and hardly an expert at the time.  But she noticed something interesting. The high-end residential market was a very secretive world: there was no reliable information on the sales prices of apartments. Corcoran saw an opportunity to “fake it” and to brand. She added up the year’s sales and divided by 11 and came up with $254,232. She rounded it and came up with $254,00, which she labeled as the “average New York City apartment price.” She branded the one-pager she put together, “The Corcoran Report,” made sixty copies and sent it to every reporter at the New York Times. The next Sunday on the front page of its well-read real estate section was a feature article that began, “According to Barbara Corcoran, president of The Corcoran Group real estate company, the average price…” Previously a nobody, overnight Corcoran and her company became the experts on New York real estate. Faking it a bit in the early days helped her make the big time.

2. Be bold in presenting your ideas

Smart entrepreneurs think of building a brand from the get-go.  American entrepreneur Sara Blakely was a part-time fax machine saleswoman and a part-time stand-up comic who wanted to look svelte with no tell-tail panty lines showing when she wore slim pants. So she chopped off a pair of pantyhose and called her shapewear creation, “Footless pantyhose.” A few years later she came up with a saucier name, Spanx, partly for its “virgin-whore tension.” On her website she says, “We feel the name is edgy, fun, extremely catchy and for a moment it makes your mind wander (admit it). Plus, it’s all about making women’s butts look better, so why not?”  In the early days, Blakely held her breath every time she said her company name on the phone. Some retailers were so offended by the brand name that they often hung up the phone when Blakely called to make a sale. When the Spanx website was launched, Blakely’s mother accidentally steered her lunch guests to spanks.com, a porn site! But when Spanx finally found distribution in retail stores, women loved the saucy brand name. Blakeley also shows her naming chops in sub-brand names. She calls her lightweight girdle, “Power Panties,” her activewear, “In It to Slim It,” her legwear, “Tight-End Tights,” her casual separates, “Bod a Bing!” and her lightweight undershorts “Skinny Britches.” Today Blakely is the wealthiest self-made female billionaire.

Despite things we’ve been told like “talent wins out,” the reality is more like, “visibility wins out.” Talent is important, but visibility separates those who are wildly successful from those who are just doing okay.

Marissa Mayer was employee number 20 at Google and its first female engineer, a distinction that Mayer made the most of in her self-branding. Besides her gender, Mayer stood out in one other very important way at Google, she was an “articulate geek,” two words that rarely go together.  So Mayer was tapped as the spokesperson and public face of the company. This made Mayer not just the highest-ranking woman, she was the most visible person at Google. She was soon perceived as a Silicon Valley superstar and the leading force behind the design of the Google home page and its search product. Today, Mayer is the CEO of Yahoo charged with turning the company around.

All of these personal branding principles are easy to understand, but highly successful women running big companies act on them. After all, if you don’t take charge of your brand, who will?