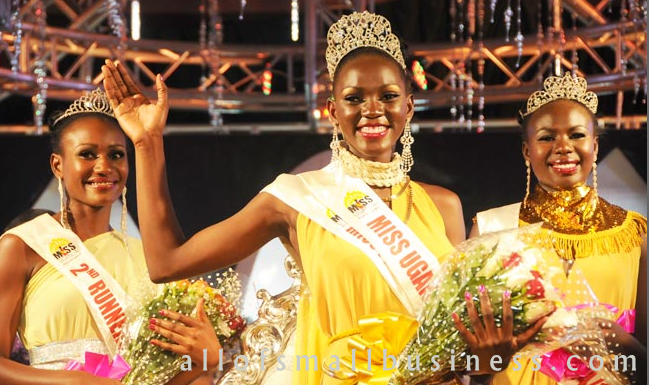 A former small business entrepreneur of mushroom and poultry farmer has been crowned Miss Uganda following a major rebranding of the annual beauty pageant, now designed to promote agriculture in the east African nation.

Leah Kalanguka, 23, beat off 19 other finalists after a competition that saw the glamour of the catwalk ditched for an army-sponsored boot camp on a farm, where contestants had to milk cows and work with goats and sheep.

“The youth will love agriculture because it goes hand in hand with beauty. Right now, farming is mostly done by elderly women,” Kalanguka, wearing a gold dress, tiara and a sash, told AFP during late Saturday’s awards ceremony.

After years of following the more traditional beauty pageant formula, organisers applied the theme of ‘promoting agriculture small business entrepreneurship among the youth’ to the event and partnered with the Ugandan army — which has major business interests in agriculture.

“It’s a great direction because the agriculture sector has great opportunity for jobs, so I’m simply grateful that it took that direction and I would really love to see it promoted in our country because it is the backbone,” Kalanguka commented.

At the awards ceremony, finalists were quizzed about farming on stage.

One contestant, Sheila, was asked “what opportunity can family farming represent for the youth?” She replied promptly: “If you’re a youth or a young child and you notice that your family is carrying out agriculture it would motivate you to go on carrying on the same thing.”

“Agriculture is a Ugandan value and we salute that,” he said.

Kalanguka, who has studied computer engineering and science at Makerere University in Kampala, where she lives, said she was “so happy” and “overwhelmed” to be crowned Miss Uganda — which saw her win a small car.

“I did not expect this to happen,” gushed the winner.

Organisers said the top finalists will eventually be used to market produce including potato flour, mango juice, cornflakes and honey.