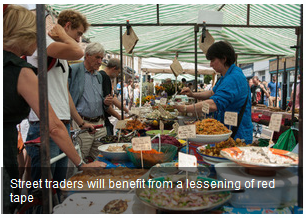 Reforms to street trading rules will make them both stronger and fairer, a government minister has said.

Plans set out in the government’s response to a consultation held last year include amending street trading legislation so that undue restrictions on licences for pedlars and street traders are removed, and character checks to include a search of the police national databases are to be applied consistently across the UK.

Also, the requirement for a pedlar to have lived in the area where he or she wants to operate will be removed.

Consumer affairs minister Jo Swinson says the new system, being introduced next year, will remove unnecessary burdens from traders operating in market places up and down the country while making sure the system is compliant with EU law.

The planned changes are part of the government’s Red Tape Challenge and will come into force in April 2015.

Swinson says, ‘Street traders play a vital role in vibrant marketplaces right across the UK. These changes will ensure that shoppers can have confidence that street traders have undergone proper checks before trading, while making those checks simple and straightforward.

‘Street trading stalls are an important part of British culture and offer a great place to shop. We want a system that is fair for everyone who wants to sell and buy goods.’

Peter Goodman, national director of Operation Liberal, part of the National Doorstep Crime Intelligence Unit adds, ‘We very much welcome this announcement from the Department for Business, Innovation and Skills today. The Pedlars Act has enabled police forces to protect some of the most vulnerable members of our community.

‘This has been done by vetting applications to trade in this way and identifying those individuals who purport to be legitimate traders, yet have a record of dishonesty and other previous convictions both in the UK and abroad. The new character checks are a welcome strengthening of the current certification regime.’

The changes will ensure that consumers can have confidence that pedlars will have the same checks no matter where they trade. This will include a check of the Police National Database to see whether the applicant has a criminal record or is suspected of having links with criminal activities.

The reforms will also remove a requirement for traders to prove that they have lived in an area they wish to trade in for at least one month. This was not compliant with European law and restricted enterprise unnecessarily.

It is hoped the changes will help to reduce barriers to street traders and pedlars by making it easier to trade, boosting retail and helping small traders – including many young entrepreneurs – to expand and grow.